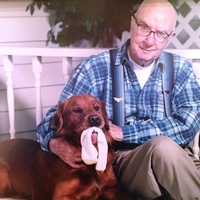 George was born November 26, 1922 to Leonard and Marguerite (Flannery) Barron in Flandreau, SD. He graduated from Flandreau High School in 1940. He joined the Civilian Conservation Corps working in the Black Hills for the Forest Service, and as a truck driver, constructing air bases in Rapid City and Pierre, SD and later at a delivery service in Bismarck, ND.

George joined the Navy V-5 Pilot program in 1943 and was called to active duty. He was commissioned as an Ensign and received his gold pilots’ wings in May 1945. He flew PBY flying boats in Jacksonville, FL, and was assigned to advanced seaplane operations when WWII ended. In 1946, he moved to Jamestown as a flight instructor at Smith’s Flying Air Service where he met his wife when she took flying lessons, after her service in WWII as an Army nurse.

George married Jewel Berner on November 27, 1946 in Jamestown, ND at the Basilica of St. James. They lived in Jamestown, built their own home, raised three children, and many golden retrievers and cats. George graduated from Jamestown College in 1950, taught and coached basketball at Cleveland, ND. George started at Jamestown High School in 1951, where he taught chemistry, aviation, physics, motorcycle and driver’s ed.

George enjoyed decades of hunting with his much loved friends, The Roadkill Gang, loved dogs, photography, camping, rock masonry, construction and baking pies. He also had a passion for genealogy and published many books on the topic.

He was preceded in death by his wife, Jewel; his parents; mother and father in-laws; brother, Marion; brother of heart, Arnie Swanson, and grandson, Jason.

In lieu of flowers, please donate memorials to the organization of your choice.