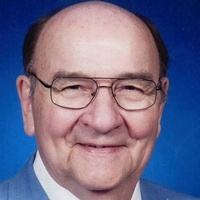 Vernon W Schauer was born to Emmanuel & Caroline (Ketterling) Schauer on July 30th, 1932 in Dawson North Dakota. Rusty, as he is called, graduated from Dawson High School in 1951. After graduation he worked one year on the railroad before enlisting in the U.S. Navy in April of 1952. He spent four years in the Navy during the Korean war. He was stationed in the west coast. While in service he met his future wife Marsha Wood, who was from White, South Dakota. After Rusty received an honorable discharge from the Navy he moved to Bismarck, North Dakota. He was then accepted in the school of X-ray technology at Q&R clinic in Bismarck. After receiving his certification for an X-ray technologist, he stayed as a staff member & instructor for the school for several years.

He married Marsha Wood on May 6th, 1956 in White, South Dakota. They had two children, Dawn and Kirk. Rusty and Marsha moved to Jamestown in 1977. While residing in Jamestown he worked for the Jamestown Hospital and Dakota clinic (Sanford clinic today). Rusty retired from Sanford clinic on March 20th, 2014 after working in the X-ray technology field for a total of 58 ½ years. Rusty moved to the Napoleon Assisted Living in July 2016 until the time of his death. His greatest joy in life were his grandchildren who he treated like royalty. He often referred to Karissa as his princess who grew up to be a queen. He spent many hours golfing with his grandson Austin and those were cherished times for him. He thoroughly enjoyed his work and spending time with his co-workers, which created lasting friendships. One of his most loved hobbies was maintaining a pristine yard. He was a man of god and his faith was important to him. He treated all with kindness. He had an incredible sense of humor who he shared with everyone. There could be no gathering without him telling a few jokes. He will be deeply missed by family and friends.

Rusty is preceded in death by his parents, 2 brothers, and 5 sisters. His wife Marsha passed away on January 6th, 2015.

White, SD 57276
To order memorial trees or send flowers to the family in memory of Vernon &#39;Rusty&#39; Schauer, please visit our flower store.