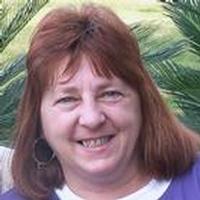 Terry (Krause) Remboldt passed away August 9th at home surrounded by family after a four month battle with pancreatic cancer.

Terry was born September 13, 1954 in Gackle, ND the daughter of Jacob and Irene (Lang) Krause. She attended Alfred Elementary School and Gackle High School, graduating in 1972.

Terry and Dean Remboldt were married June 25, 1972 in Gackle, ND and celebrated their forty-third anniversary this year. They made their home in Bowman, Gackle where they had the Fairway Food Store, and Lamoure. They moved to Jamestown where Dean and Terry owned and operated the Plaza Barber Shop. Terry attended Molar Barber College, Fargo, in 1987-88. She and Dean have continued to barber together in Jamestown until her illness in April 2015.

She held the positions of Historian and Vice President of the North Dakota Barber Association. She took pride in sponsoring the barber shop at Frontier Village over the years.
Terry and Dean followed all of their son, Pete's, baseball, basketball, football and track events, including all of the Jimmies football games. Terry really loved her grandchildren, Chase, Gunnar, and Jayda. They were the light of her life and she enjoyed playing with them and attending their activities. She and her husband spent many happy days on Lake Mary in Minnesota fishing and boating. She enjoyed making s'mores with her grandkids, conversations around t
the campfire, and rummage saling with the girls.

Terry was always there for her brothers, Robert and Rodney, and sister, Karen. She loved driving Bobby's Corvette and teasing Rodney. She and her sister, Karen, kept in close contact sharing with each other on the phone and taking many happy summer expeditions. They all grew up on a farm. Some of Terry's chores included stacking hay and picking rocks. She teased that her mom got a dishwasher and her dad got a rock picker after she left home.

She was preceded in death by her parents, Jacob and Irene Krause, and sister-in-law, Karen

A "Celebration of Life for Terry" will be held at the Klaus Park in Jamestown, North Dakota, 7 to 9 p.m. on Friday August 14, 2015. Meet at the south picnic shelter.

Memorial Services will be held for relatives and close friends at Haut Funeral Home in Jamestown, ND on Saturday, August15 at 1 p.m.

To order memorial trees or send flowers to the family in memory of Terry Remboldt, please visit our flower store.
Send a Sympathy Card