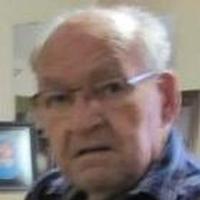 Raymond Wentz was born June 25, 1923 at Streeter, ND, the son of George Wentz and Margaret (Graf) Wentz. He attended the Streeter Public School, went through 2 years of high school.

He went to the CCC for 1 year. He was in charge of the camp which closed because war broke.

He and Delores Fischer were married January 1, 1942 at Vancouver, WA. He was drafted into the US Army in February 1942. He went to Airplane Mechanics School for 6 months in Amarillo, TX. He then was stationed at Myrtle Beach, SC as an Airplane Mechanic. Ray was shipped to London, England for 6 months to be a German translator. He was discharged February 16, 1946 with the rank of CPL and returned to North Dakota.

They moved to Danzig and made their home on a farm for 1 year and then went back to Streeter and farmed in the area.

He and Lois Burleson were married in 1985 and continued to live in Streeter where he worked for the US Postal Service as a rural mail carrier in the Streeter-Medina area. In 2004 they moved to Jamestown.

He was a lifetime member of the Streeter American Legion Post #265.

To order memorial trees or send flowers to the family in memory of Raymond Wentz, please visit our flower store.