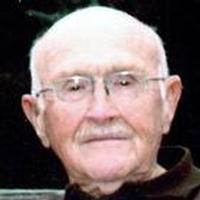 Oliver Otto was born September 16, 1926 at Gackle, ND, the son of Edward Otto and Bertha (Remboldt) Otto. He received his education at the Gackle public school. He began working at the Gackle Creamery until he entered the US Army March 16, 1945 at Fort Snelling, MN. He served in the Asiatic Pacific Theater and Japan. He was honorably discharged at Fort Lewis, WA November 25, 1946 with the rank of PFC. He returned to Gackle and was again employed by Martin Baer at the Creamery. He spent many years making friends, as he drove various cream truck routes to farms and towns in this south central area.

He and Phyllis Tranmer were married February 9, 1952 at Bismarck, ND. They made their home in Gackle where he became a Standard Oil agent after taking over the business from his father-in-law, Art Tranmer. He retired from the business in 1983. One of the highlights of his retirement was to be thought of as the "Candy Man" by many of the children in town that he loved and spoiled with candy.

He attended the Grace Baptist church in Gackle. He was the treasurer of the Gackle Fire Dept. for 18 years and served on the city council for 4 years. He was a member of the American Legion and also served on the Gackle Cemetery Board.

He was preceded in death by his parents, 1 sister and brother-in-law, Myrtle and Albert Geiszler, 3 brothers in infancy and his in-laws, Art and Blanch Tranmer.

In lieu of flowers, Please send memorials in the name of Oliver's name to the Grace Baptist Church, Gackle, ND

To order memorial trees or send flowers to the family in memory of Oliver O. Otto, please visit our flower store.