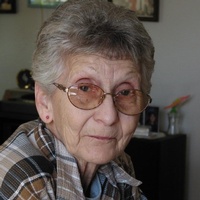 Mavis Phyllis Eisenbeis was born March 13, 1929 on a farm northwest of Fredonia to Reinhold and Hulda (Krueger) Eisenbeis, the second oldest of six daughters, and baptized Lutheran. She attended elementary school through the eighth grade, first at Nathan School District #1 and then at Haag School District #4. She was confirmed in Martin Luther Lutheran Church in Fredonia on April 2, 1944 by Rev. John Bunge.She expressed few regrets in her life other than that she was unable to continue school after the eighth grade, when she went to work for various neighboring farmers to do house work and general farm labor. She grew to womanhood on the farm, spending most of her time helping her dad on the farm, as she had no brothers.

Mavis married Ted Weispfenning on November 28, 1948 in Fredonia at Martin Luther with Rev. Bunge officiating. They built a new, three-room house on the Weispfenning homestead three miles north of Fredonia and farmed with Ted’s father Christ and mother Louisa. A son Jeff was born in 1950, and another son Barry was born in 1953. Mavis and Ted maintained a grain and dairy farm, building a small herd of purebred and grade Brown Swiss dairy cows. After Ted’s death on December 12, 1996, Mavis purchased a home in Kulm in 1997. On October 8, 2018, she moved to Prairie Pointe, an assisted living facility in Bismarck, where she resided at the time of her death.

Mavis was a true partner in the family farm and was capable of performing any and all of the work that needed to be done on the farm. She sometimes referred to herself as a “milk maid” and would strongly reprimand anyone who dragged dirt into her milk house including her family, state dairy inspectors, milk haulers or a visiting neighbor. She was a highly skilled gardener and tried growing anything that might have a chance of surviving the North Dakota climate. Although gardening was a necessity to feeding her family, she loved gardening and being outside tending her garden. She was heartbroken when she no longer was physically able to care for a garden at her home in Kulm. She was a hard working person, and she enjoyed the work she did.

Mavis loved playing the organ, with a pump organ the centerpiece of the living room in her farm home. Later she had a fancy electric Hammond organ purchased from the proceeds of Ted’s trap line. She served her church as an organist, as a member of the church choir since age 13, as a Sunday school teacher, as a Bible school teacher and was a member of the Ladies Aid, the ALCW and the Altar Guild. Her strong, smooth alto would help lead the worship every Sunday morning at Martin Luther. Although her health prevented her from attending morning worship after a fall in spring 2017, she eagerly read the Sunday bulletins regularly delivered by her niece Darlene until her death.

Mavis loved to fish, and she loved to eat fish. She shore fished with Ted on various lakes and dams, and especially enjoyed fishing with Ted’s sister Frieda and her husband Otto. One year, with already some ice on the water, Ted learned of a good walleye bite at LaMoure Dam. He got up at 3:30 the next morning, and checked his trap line in the dark. Mavis, who hated early mornings, got up not much after and began to get the cows ready for milking. After milking, they packed lunch and caught nice walleyes all day until they had to come back to milk the cows that evening. After they ate supper, they cleaned the fish, went to bed, and then did the same thing for the next three days. In their later years, they purchased a boat, which allowed them to cover more water, but secretly they remained hardcore shore fishing people. After the cows were sold in 1985, Ted and Mavis owned a fish house that they towed out on the ice at Lake Oahe near Pollock, SD on Sunday nights in winter. They would stay out on the ice until Friday when they would return home to clean up, take care of chores, go to church on Sunday morning and then leave again on Sunday night for the next week of fishing out on the ice. After Ted’s death, she never fished again.

Mavis was an avid reader. Every evening you could find her at her table, TV playing, surrounded by a pile of reading material and a selection of snacks. She read the daily Fargo Forum front page to back for over fifty years and was informed of current affairs as a result. Her mind was sharp until the end, recalling events from decades ago for her nurses and mentioning previously unheard stories right up to her last hours.

To order memorial trees or send flowers to the family in memory of Mavis Weispfenning, please visit our flower store.
Send a Sympathy Card