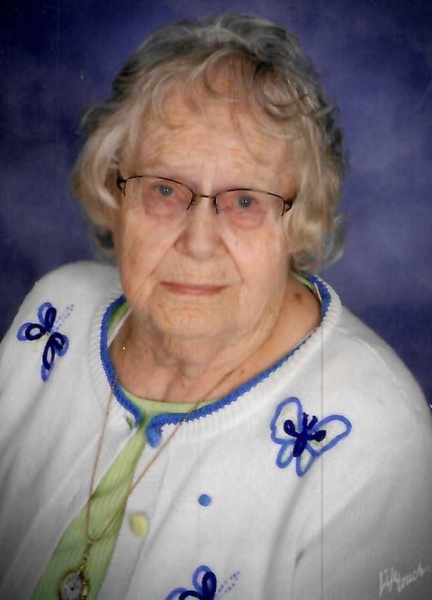 Martha was born February 20, 1928 to Emil and Elisabeth (Moser) Mayer of Medina, ND.  Martha grew up in a family of 7 children in Stutsman County and attended the local school.  Martha married Vern Ruff on August 5, 1947; together they had 4 children.

Martha loved to sew, crochet and made many quilts.  In recent years it was becoming harder for her to do these because she was losing her eye site.  Martha’s most favorite pastime was to sing.  She sang with the German singers out of Jamestown for many years before moving to MN.  At the time of her passing she was involved in two singing groups at her nursing facility.  She and Vern lived in the Grand Rapids, MN area for several years, then moved to Pillager, MN in 1962.  After she and Vern divorced, she moved back to Medina, ND where she had the privilege of taking care of her parents until their deaths.  Years later she moved to Jamestown and lived with her brother Paul until his death.  In 2010 she came to Wilmar, MN and lived in her own apartment until the fall of 2015 when she moved into assisted living.  As Martha’s Alzheimer’s disease and her congestive heart failure progressed into November 2018, she moved into Bethesda Nursing Home in Wilmer where she lived until her death.

To order memorial trees or send flowers to the family in memory of Martha Ruff, please visit our flower store.