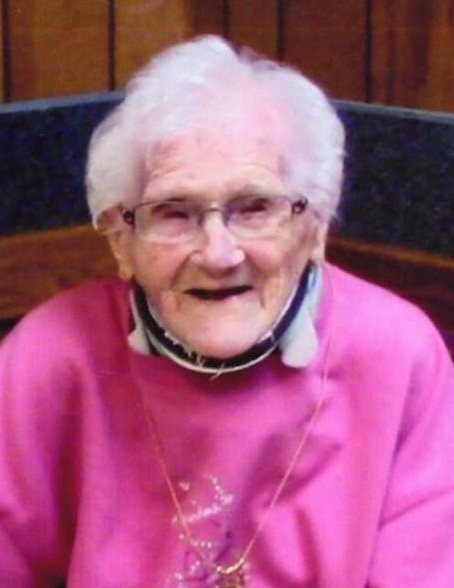 Laraine was born July 25, 1923 at Jamestown, ND the daughter of Edward & Bertha (Remboldt) Otto. She attended the local school in Gackle and grew to womanhood in the area.  She worked at Fritz Kruger Café.

LaRaine and Albert Dorr were married in November of 1943 at the Carl Dorr farm.  They made their home on the Dorr farm for 2 years.  They then moved to a farm NW of Alfred.  Albert died 1956, after purchasing the café in Gackle and moving to Gackle in 1954.

LaRaine Otto-Dorr and Howard Dockter were married August 31, 1961 at Gackle. They made their home in Gackle where she was a cook at the school among other jobs in the Gackle community.  In 1974 they moved to Linton where she worked at the bakery.  They moved back to Gackle in 1993 where they continued to reside until 2019 when she moved into the Gackle Care Center.

She was a member of the Emmanuel Lutheran Church & a 70-year auxiliary Legion Member.  She loved to bowl, golf and playing cards.  Crocheting was a passion of hers along with bingo and crafts that included quilting.

She was preceded in death by her husbands, Albert and Howard; her parents; 1 grandson, Benjamin; 1 sister, Myrtle Geiszler and 4 brothers, Oliver Otto and 3 infant brothers.

In lieu of flowers the family requests memorials to the Emmanuel Lutheran Church in Gackle, the Gackle Care Center, the Gackle Ambulance, or JRMC Hospice.

Your browser does not support this video format. You should be able to view it in Chrome, Safari or Internet Explorer.
To order memorial trees or send flowers to the family in memory of LaRaine Dockter, please visit our flower store.