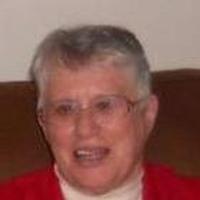 Joyce Spilloway was born August 24, 1935 at the family farm home SW of Gackle, ND, the daughter of John and Leontine (Geiszler) Spilloway. She attended school at Gackle and graduated from Gackle High School in 1953. She attended Valley City Teachers College and taught in rural schools for 3 years.

She and Albin Kleingartner were married June 5, 1955 in Gackle, ND. They made their home on the Kleingartner Farm for 10 years, and then moved into Gackle and bought the J.S. Spilloway Farm in 1975 and lived there until 1994 when they moved back to Gackle for their retirement and have resided there since.

She was preceded in death by her parents and step-mother

To order memorial trees or send flowers to the family in memory of Joyce Kleingartner, please visit our flower store.