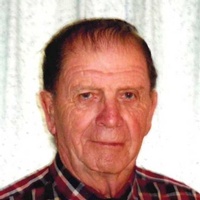 Jerome Reule was born July 22, 1935 at Medina, ND, the son of John Reule and Rachel (Schauer) Reule. He attended the local school in Medina graduating in 1953. He worked in the

Oilfields in Montana and North Dakota.

He and Lila Wolfe were married October 25, 1958 at Medina. Jerome spent 2 years in the Army and then after being discharged in April of 1960 they settled in Medina. He worked construction in MT, WY, and IA.

He was a member of the Medina City Council, a union rep for the railroad, Elks Club, Eagles Club, Medina Sportsman club. He was also recently inducted into the Fur Takers Hall of Fame.

He was preceded in death by his parents; 1 son Tracy, 2 sisters, Joanne, Renee and 1 brother John.