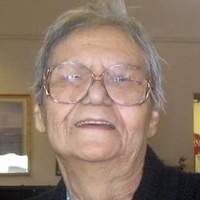 Janet Khan was born December 25, 1937 at El Centro, CA, the daughter of Atta Mohammed Khan and Benigna (Felix) Khan. She attended school and graduated from El Centro High School in 1955. She worked for the United States Government as a secretary.

She and John Kubenski were married May 11, 1962 at El Centro, CA and made their home there until moving to Moorhead, MN in 1963. In 1978 they moved to Jamestown where she was a house wife and has continued to reside. She entered Eventide in 2015.

Janet is survived by her husband John and son John Jr., both of Jamestown, ND; 2 brothers, George Khan, Robert Khan, and 1 sister, Sarah Garcia, all of El Centro, CA.

She was preceded in death by her parents, 2 brothers and 1 sister.