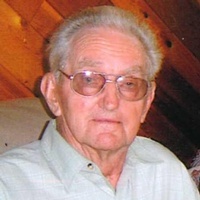 James was born October 25, 1921 at Jamestown, ND, the son of Frank Staloch and Mary (Schultz) Staloch. He received his elementary education in the local school and graduated from the Windsor School. In 1939 he went to work as a hired man on the farm he now owns at Medina.

In 1940 he joined the Civilian Conservation Corp and worked in MT and SD for 9 months. He then worked on the family farm until he was drafted into the US Army July 13, 1942 at Ft. Snelling, MN. He served in the European Theater, where he earned a bronze star for valor. He was discharged November 7, 1945 at Camp Chaffee, AR with the rank of PFC. He returned to ND and continued to work on the family farm at Windsor and spent winters working construction with his brother in Amarillo, TX.

Jim and Hazel Olson were married May 31, 1950 at Windsor, ND. They made their home on a farm at Cleveland, ND until 1961 when they moved to a farm near Medina, ND. Following their retirement from farming in 1981, they moved into Jamestown where Jim continued to work for the ASCS office for 20 years. He entered Ave Maria Village in 2011.

He was a member of St. Mathias Catholic Church in Windsor, ND and served on the church building fund committee. He was a Sunday school teacher, trustee and President of the Tri-Parish Council. He was a lifetime member of the Knights of Columbus in Jamestown. He served on the board of the Cleveland Farmers Elevator, and was President of the Cleveland Wildlife Club. Jim was a Life member and Commander of the VFW Post 9071 in Cleveland.

He was preceded in death by his parents, 1 grandson, Aaron and 1 brother, Herb.

Memorial Mass will be 2:00 PM Monday, February 11, 2019 at the Basilica of St. James in Jamestown, ND with Fr. Patrick Parks, officiating.

It was Jim’s wish to have his body be donated to the Anatomical Gift Program at the University of North Dakota in Grand Forks, ND.

Inurnment will take place at a later date in the North Dakota Veterans Cemetery in Mandan, ND.

In lieu of flowers the family requests memorials to the Jamestown VFW.

Arrangements are by the Haut Funeral Home in Jamestown, ND.

Basilica of St. James
To order memorial trees or send flowers to the family in memory of James Staloch, please visit our flower store.