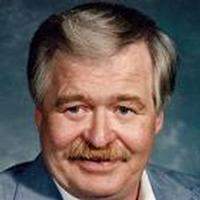 Jim was born November 19, 1945 at New Rockford, ND, the son of Lee and Elsie (Ingebretson) Cook. He attended school at Cathay and graduated from Cathay High School in 1963. He attended Valley City State College for 2 years and UND for a ½ year.

He and Patricia A. Nelson were married October 9, 1970 at St. James Catholic Church in Page, ND. They made their home in Carrington where he worked for G.T.A. Elevator until 1971. They bought the bar in Sykeston and ran it until 1973 when they started farming. They farmed on the family farm until 2009. He managed the Vet's Club in Carrington from 1976-1979, and also the Sykeston bar for 1979-1982.

He and his family attended the St. Elizabeth Catholic Church at Sykeston.

He was a member of the American Legion Post #0017 in Sykeston, the DAV and the VFW. He loved to play cards of all kinds, was a big fan of local sports, especially football and basketball. He also enjoyed his time hunting and fishing with family and friends.

Interment - will be at a later date

To order memorial trees or send flowers to the family in memory of James Cook, please visit our flower store.