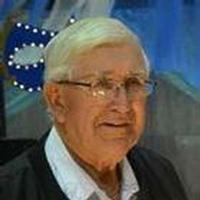 Gordon was born June 5, 1930 on the family farm southwest of Gackle, ND the son of Balzer and Olga (Schlenker) Kleingartner. He received his elementary education in Gackle and grew to manhood in the vicinity where he helped on the family farm. He entered the US Army February 29, 1952 at Fargo, ND. He served during the Korean Conflict and received a Bronze Star and a Purple Heart. He was discharged November 27, 1953 at Ft. Lewis, WA with rank of SGT.

He and Laverna Widmer were married Novemer 14, 1954 at Gackle, ND. They made their home 7 miles south of Gackle where they farmed from 1954 until 1995 when they moved into Gackle. Following the death of his wife December 18, 2007 he has continued to live in Gackle. He recently entered Eventide in Jamestown.

He was a member of the First United Church of Christ, the Mayer-Morlock Post #250-American Legion and Gackle Senior Citizens. He enjoyed farming, playing pinochle, spending time with family and friends. He especially enjoyed time with his granddaughters.

He was preceded in death by his parents, step-mother, Martha Kleingartner, his wife, 1 brother Rupert and his wife Lorraine, and 1 sister-in-law, Joyce.

There will be a Graveside service at 2:00 PM Sunday September 6, 2015 at the Gackle City Cemetery in Gackle, ND with Rev. Rick Steele officiating.

Following the graveside the family invites everyone to the Lutheran Church in Gackle for a time of lunch and fellowship.

In Lieu of Flowers the family prefers memorials to the American Legion Post in Gackle.

To order memorial trees or send flowers to the family in memory of Gordon D Kleingartner, please visit our flower store.