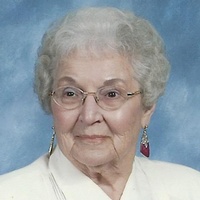 Esther C Malinski was born January 18, 1925 on the farm near Woodworth, ND in NW Stutsman County, the daughter of Joseph Malinski and Victoria (Friez) Malinski. She attended the local school in Conklin Township and graduated from Carrington High School in 1944. She worked for a short time for Douglas Aircraft in Chicago. She returned to Jamestown and worked at various jobs in the secretarial departments and finally at the ND State Hospital, secretary to the Engineering Department until she retired in 1990. She entered Ave Maria Village in January of 2018.

She was a faithful member of the First United Methodist Church in Jamestown, singing in the choir for many years. She served as UMW President for a number of years and held multiple offices in Circles and the UMW. She was an avid bowler, bowling in local leagues for over 50 years and threw out the ceremonial first ball to start the 2012 state tournament at age 87. She was inducted into the Jamestown Women's Bowling Association Hall of Fame. She and her sisters traveled to many National Tournaments as a 5 sister team. She was President of the JWBA from 1983-1995 and held multiple league offices during her membership in the WIBC.

Esther loved to crochet and knit and made many afghans. She crocheted doilies for the Jamestown Hospital gift shop, one of the many charities she generously supported. She also loved to read. In summer she could often be found sitting on her back patio, watching the birds she attracted with feeders and houses she built herself, and listening to the Twins on the radio.

She loved spending time with family, often traveling with her siblings to special events and reunions. She cherished time spent with her children and grandchildren, who loved her deeply and will miss her greatly.

She was preceded in death by her parents Joseph and Victoria Malinski, brothers Edward, Adam, Chester and infant Raymond, sisters May, adolescent Helen and Delores.

A celebration of Esther’s life will be held Friday, May 4th at 1 PM at the First United Methodist Church in Jamestown, ND with Rev. Elmo Herman, pastor officiating.