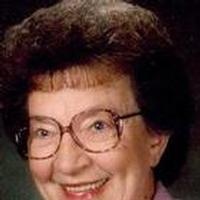 Ellen Niskanen was born July 8, 1923 at Gackle, ND, the daughter of Charles and Hilda (Saarie) Niskanen. She attended and graduated from Gackle High School in 1941.

Ellen and Irving Wirkkunen were married June 4, 1944 at her parent's home. They made their home on the Wirkkunen farm. In 1956 they moved to a farm just SE of Gackle where they resided until moving into Gackle in 1995 where they have continued to reside. Following the death of her husband in February 2006 she continued to live in Gackle until the fall when she moved to an apartment in Jamestown.

She was a member of the St. Paul's United Methodist Church in Jamestown

She was preceded in death by her parents, her husband, and 3 brothers, Ray, Norman and Willard, 1 son-in-law, John Orvik.

To order memorial trees or send flowers to the family in memory of Ellen A. Wirkkunen, please visit our flower store.