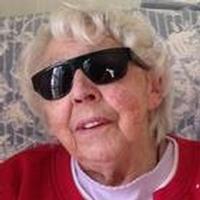 Eleanore Roberge was born December 12, 1929 at Olga, ND, the daughter of Ralph Roberge and Agnes (Gendreau) Roberge. She received her education at the School for the Blind in Bathgate, ND; later receiving her GED.

She and Orr Tranmer were married February of 1957 at Windsor, ND. They made their home on his farm South of Windsor where they farmed until retiring and moving to Jamestown, ND. Following the death of her husband on September 15, 1992, she continued to reside in Jamestown. She moved to Nebraska in 1999 and in 2012 she moved to Virginia where she has resided since.

She was a member of the Basilica of St. James in Jamestown, later becoming a member of St. Mary's Catholic Church in Sutton, NE. She was very active in her church community.

She was preceded in death by her parents, husband, 3 sons, 1 grandson, 1 granddaughter, 1 brother and 1 sister.

To order memorial trees or send flowers to the family in memory of Eleanore Tranmer, please visit our flower store.
Send a Sympathy Card