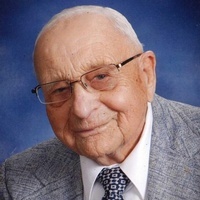 Eddie Dockter was born January 29, 1916 7 miles NW of Streeter ND the son of August M. Dockter and Matilda (Schlenker) Dockter. He received his elementary education in the local school and helped on the family farm.

He joined the Civilian Conservation Corp in July of 1934 at Fort Snelling, MN and was stationed in ND, MN and SD. He returned home to farm for a couple of years before being drafted into the United States Army on February 21, 1942 at Fort Snelling, MN. Eddie’s basic training was in Sheppard Field, TX. He served in the Army Air Corp as an Air Operations Specialist at Air Bases in NY, CT, VA and MI. He was Honorable Discharged December 14, 1945 at Chanute Field, IL, with the rank of Sergeant.

He and Avis L. Robinson were married Sept. 22, 1945 in Flint, MI where they made their home. Eddie was employed with Fischer Body on Assembly Line and off line repair until 1949 when he was asked to join Buck Motor Div. owned retail outlet in Flint as a Quality Controller and Auto Body Trimmer. Following the death of his wife Avis he continued to reside in Flint. He and Lola A. Pike were married on October 12, 1963 in Flint, MI. where he continued to work at the Buick Outlet. In 1975 he retired and they moved to Streeter. Lola passed away March 29, 2005. Eddie has continued to reside in Streeter until recently when he entered the Wishek Living Center.

He was a member of St. Lukes Lutheran Church in Streeter, American Legion Post 265, Streeter, ND.

He was preceded in death by his parents, wives, 2 sisters, Vi Remboldt and Ruth Fischer, 3 brothers, Arthur, Adam and Harold.