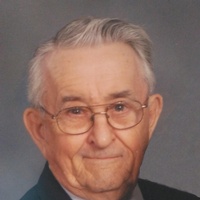 Our Father Chris Graff went to be with the Lord on Monday, April 2, 2018, to join our Mother in Heaven.

Chris (Sonny) was born on July 15th, 1929 to Chris and Mrytle Graff at the Trinity Hospital in Jamestown ND. He graduated from Jamestown High School in 1947. He attended college 1947-1951 until he was drafted into US Army and sent for training to Indiantown Gap, Pennsylvania ...He served as a Corporal in the Korean War from 1951-1953 where he received an honorable discharge.

He returned to Jamestown after serving in the army, where he went to work for his father Chris Sr at Graff's Standard..

He then married our mother Delores V( Malinski) Graff and continued to run and operated Graff's Standard service station after Chris Sr retired...Chris and Delores were married for 62 years. They retired in 1992 after 37 years in the service station business.

Chris and Delores were lifetime Members of the VFW, Elks and Eagles clubs in Jamestown. Chris was also member of the 1st United Methodist Church in Jamestown, ND.

He was preceded in death by his father, Chris, mother, Mrytle Graff, and his wife Delores on March 15, 2018.

In lieu of flowers or gifts the family asks that you donate to Meals on Wheels , Hospice or any Veterans Associated Administration in his memory.