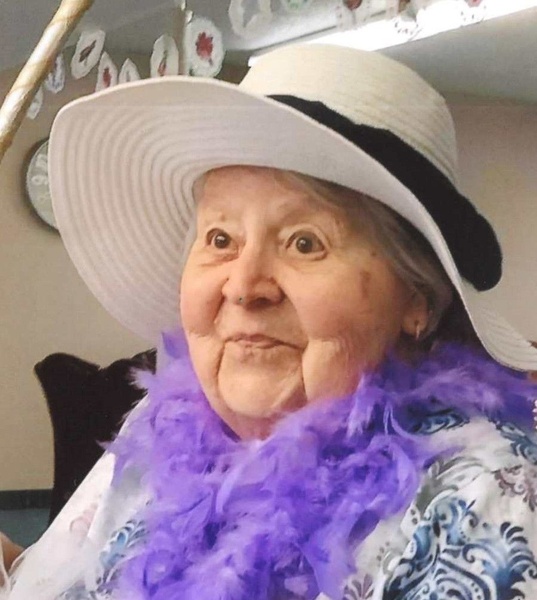 Beverly M. Ecker, age 94, of Jamestown, died Friday, October 8, 2021 at Eventide. Her funeral service will be at 11:00 AM Wednesday October 13, 2021 at Haut Funeral Home, Jamestown. Burial will be in Highland Home Cemetery. Visitation will be one hour prior to the service. Memorials may be directed to JRMC Hospice https://jrmcnd.com/give-now/ or First United Methodist Church of Jamestown http://www.jamestownfirst.org/contact. The family requests that face masks be worn to her services.
Beverly Maxine Buechler was born April 14, 1927, in Fessenden, North Dakota to Karl Henry and Margaret (Orsby) Buechler. The family was living in Hamberg, North Dakota at the time, but just a few months later moved to Goodrich, North Dakota, where her father had purchased a service station.
She attended school in Goodrich, graduating from high school there in 1945 as the valedictorian from her class of sixteen. She attended a summer session at Valley City State College and became qualified as a rural school teacher in a just a few months due to the shortage of teachers during World War II.
Bev taught in Boone Township in Sheridan County, North Dakota in a schoolhouse with no indoor plumbing, receiving a salary of $900 for the year. After working in the Goodrich Post Office the following summer, she attended Interstate Business College in Fargo and worked part time at Straus Clothing Store in Fargo. She began work at Fargo Investment Company as a secretary on July 1, 1947, a position that she held until September 1, 1951. It was also that July that she met Bob Ecker, who was originally from Grandin, North Dakota. They were married April 11, 1948 at First Baptist Church in Fargo.
They lived in Fargo and in Moorhead before moving to Mayville, North Dakota in 1957. They lived in Mayville just two years before returning to Fargo in 1959.
Bev was primarily a homemaker while her children were growing up. However, in May 1970 she took a job in the phone order department at Sears in Fargo. In October 1971 they moved to Jamestown and bought a house across the street from Gussner School, where they enjoyed watching and listening to the school children at the playground. Bev was employed as a secretary and copywriter at KEYJ radio for nine years and then as a secretary/receptionist at Hometown Realty until her retirement. In 2005, she sold her house and moved into an apartment.
Bev grew up loving sports due to the encouragement of her father. She enjoyed playing softball and high school basketball and insisted she would have played football if she could have done so. She recalled learning to love football by listening to Big Ten football games on Saturdays while she cleaned her Aunt Eliza’s home, adding that her favorite teams at the time were Minnesota and Northwestern. When they lived in Fargo, she and Bob had season tickets to North Dakota State University football games for a number of years. She was an avid Twins, Vikings and Timberwolves fan, but also enjoyed watching college sports on television, including “March Madness” basketball.
She was an accomplished seamstress, sewing most of her daughters’ clothing, her own clothing, and countless craft items and gifts. Bev crocheted numerous afghans and tablecloths. She enjoyed playing card games, board games, and especially bridge, which she continued to play well into her eighties. She was also an avid reader and a serious Becrossword puzzle aficionado. Bev had a large vegetable garden and was busy every summer canning her produce. Bob built special shelving in the basement to store her canned goods. Her dill pickles and beet pickles were especially prized by her family. She was an accomplished baker and her family was privileged to enjoy her pies, her famous caramel rolls and homemade breads and buns. She was often asked by family to bring her breads, rolls and pies to family gatherings.
One of her favorite pastimes was traveling. She and Bob camped for many years, including time at Ottertail Lake in Minnesota. Camping trips often included searching for that perfect “find” at a flea market. They had traveled to both coasts, and twice to Hawaii, but especially enjoyed traveling in North Dakota. The last trip they took together was to Medora. After Bob’s death in 1995, she spent time in Florida during the winter with friends from Jamestown.
She was a longtime member of the United Methodist Church while growing up in Goodrich, and in both Fargo and Jamestown.
She is survived by her daughter and son-in-law, Deborah and George Kuhler of Canistota, South Dakota; two granddaughters and their husbands, Karen and Chad Hutchinson of Sylvania, Ohio and Ellen and Kersten Kappmeyer of Alexandria, Minnesota; four great-grandchildren, Julia and Lauren Hutchinson and Katherine and Andrew Kappmeyer; one niece and her husband, Connie and Roger Nelson of Santa Fe, New Mexico; three nephews, Steven and Jan George of West Fargo, North Dakota, Michael George of Victoria, Minnesota and John and Karen George of El Lago, Texas; her son-in-law, Keith Norman of Jamestown; her sister-in-law, Janice Siede of Three Lakes, Wisconsin; her brother-in-law, David and Susette Ecker of Lemore, California; and 13 nieces and nephews through marriage.

She was preceded in death by her parents; her husband on November 1, 1995; her daughter, Jane Norman on November 23, 2019; and her sister and brother-in-law, Peg and Clarence George.

To order memorial trees or send flowers to the family in memory of Beverly M Ecker, please visit our flower store.