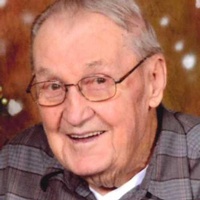 Alvin Bader, 89, Wishek, ND died Wednesday May 16, 2018 at the Wishek Hospital surrounded by his family.

Alvin was born February 22, 1929 at the family farm home SW of Wishek, ND, the son of Christ and Anna (Morlock) Bader. He attended the Wishek School where he received his elementary education and grew to manhood.

Alvin and Mavis Ketterling were married November 30, 1952 at Fredonia, ND. They made their home on a farm 6 miles NE of Lehr where they farmed for 44 years and he continued his passion to help on the farm with his sons and grandsons even after he retired. In March of 1997 they moved into Lehr. Following the death of his wife on October 7, 1997 he resided in Lehr. He spent his winters in California with his special friend Elaine Schock. He entered the Wishek Living Center October of 2015 and had continued to reside there.

Alvin was a member of the Martin Luther Lutheran Church of Fredonia, and was on the church council. He also attended the Zion United Methodist Church in Lehr. He enjoyed playing cards with his friends, fishing, and coffee time at Lehr Café with the coffee crew. He was a member of the Lehr Wildlife Club. Alvin was a kind hearted man who could visit with anyone who passed by. Most of all he enjoyed spending time with his family, and that is what he cherished and lived for. He was a great and devoted husband, father, brother, grandfather and great grandfather.

He was preceded in death by his parents, his wife, 1 brother, Emil, son-in-law, Tom Finck, 2 brother-in-laws, Harvey Schoch and Edwin Ketterling, and 1 grandson, Dillan Bader.