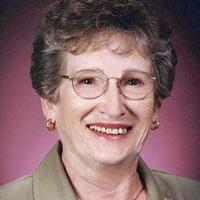 Alida Buck, Mandan, ND, was surrounded by family when she passed away peacefully at her home on December 13, 2016, after a brief battle with cancer. Funeral service will be held at 10:30 a.m. Monday, December 19, at First Lutheran Church in Mandan. Visitation will be held from 4 to 8 p.m. on Sunday, December 18, with a prayer service at 7 p.m. at Buehler-Larson Funeral Home in Mandan.

Alida Schaffer was born in the family farmhouse on February 8, 1926, in Blue Ball Township, Logan County, ND, the fifth of eight children born to Joseph and Rosina (Zenker) Schaffer. Alida was baptized on July 25, 1926, at St. Luke's Lutheran Church in Streeter and later confirmed her faith in the same congregation. Her eight years of formal education were completed at a rural school near the family farm. Alida spent much of her childhood outside in her father's shadow. He fostered in her a great love for the farm animals and a stewardship for the land and all of God's creation.

Alida married Alvin Buck on July 28, 1946, at St. Luke's Lutheran Church in Streeter. The young couple began farming in Streeter and later moved to another farm near Lehr. They finally settled on a farm in the Wishek area in 1956. Alida and Alvin were blessed with ten children who all learned what it meant to be part of a hard-working farm family. Nothing says hard work quite like rock picking and the Bucks did plenty of it. It's still rumored that someone put the rocks back into the ground while the kids weren't looking.

In May 1964, tragedy struck the Buck farm when the oldest son Darrel was killed in a tractor accident at age 15. The death of their son and brother left a gaping hole in the Buck family. As one of the siblings once remarked, "We cried until there just weren't any more tears." In 1970, the family moved to Ashley and Alida worked at the hospital there. In 1977, Alida and Alvin divorced and Alida moved to Aloha, OR, with her three youngest children. She worked at Tektronix in Beaverton, OR, for 15 years until her retirement in 1995. Later that year she moved back to Wishek. In 2004 she relocated to Mandan to be closer to family.

Children were always the light of Alida's life. Even after raising ten children of her own and enjoying twenty grandchildren, she still got a huge smile on her face when one of her twenty-nine great-grandchildren was near. She would make her way past the adults, just to sneak a quick hug or pinch a cheek. Her knack for calming babies and putting them to sleep was nothing short of magic, but then again, maybe it was just a product of seventy years of experience loving and caring for children. Alida was an active senior citizen and spent much of her time helping others. She served in the Wishek Hospital Auxiliary and as a Senior Companion. Alida frequently filled her car with friends and headed off to leisure activities, doctor visits, and shopping trips. Her love of shopping, especially with her daughters, was no secret. Even though she already had several closets full of clothes, she wouldn't miss an opportunity to spend the day at the mall. Alida enjoyed playing cards, bingo, and other games, and she played for keeps. As much as she loved those who played with her, she never dreamed of losing on purpose and wasn't afraid to scold you for taking too long when it was your turn. Cooking was one of Alida's greatest joys. She often persuaded visitors to "stay for a bit," so she could prepare a meal. Halupsi, knoepfla soup, dumplings and kraut, all sorts of "nudla", sausage, caramel rolls, and kuchen were just some of the traditional German foods that visitors were treated to in Alida's home.

Alida walked with Jesus all through her life. Whether it was joy or sadness, blessing or burden, she lived as a redeemed child of God. In her last days, after she could no longer do so for herself, her children read from the Bible and sang her favorite hymns to her. She took great joy in those simple gifts.