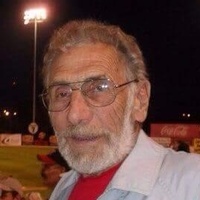 William Lewis Fetzer was born on January 18, 1934 in Anamoose, ND to Wilhelm and Karolina (Sonnenberg) Fetzer.

He married the love of his life, Regina (Fettig) on March 30, 1959 in Harvey, ND. They made their home in Jamestown, ND and later moved to Eldridge, where they had a Hobby Farm where he loved to garden and raise chickens, ducks, pigs, cows and horses. They later sold the farm and moved back into Jamestown.

He served in the Army during the Korean War from August 1954 until May 1956 Battery B48th Field Artillery Battalion and discharged as a SP 3 (T). Upon returning he worked for the railroad and later worked 30+ years in carpentry/construction first in partnership with Charlie Goodroad (B & C Builders) and Great Plains Supply later retiring from Rosen’s as a truck driver. He was a Life time member of the Veterans of Foreign Wars, District Commander of the Veterans of Foreign War from 1970-71

To order memorial trees or send flowers to the family in memory of William &#39;Bill&#39; Fetzer, please visit our flower store.