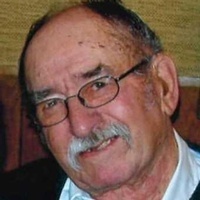 Wallace was born February 4, 1930 in Montana, the son of Edward and Amelia (Hust) Wiest. At a young age he moved with his parents to the Cleveland, ND area and attended elementary school at Medina where he went through the 8th grade.

He entered the United States Marine Corp January 10, 1952 at Minneapolis, MN. He was discharged January 9, 1954 at Santa Ana, CA with the rank of CPL.

He returned to North Dakota where he worked construction at the Stanton Power Plant for many years. He moved to Jamestown where he worked at Porter Brothers and later as a janitor for Franklin Elementary School.

Wally was a member of the Eagles and the American Legion and loved Square Dancing.

He was preceded in death by his parents, 3 wives, 1 son, 1 brother and 1 sister.