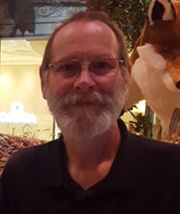 Steven was born July 4, 1955 in Jamestown the son of Joseph and Alice (Stevens) Wenzel.  He was born and raised in the Jamestown area attending Roosevelt Elementary School and graduating from Jamestown High School in 1973.  Steven entered the US Army in July of 1973 at Fort Jackson, SC and was honorably discharged in January of 1976.

He and Deborah Janke were united in marriage April 13, 1974 in Jamestown where they made their home.  In 1987 he began work at the ND State Hospital retiring in 2017 after 30 years of service.  Steven learned the locksmithing trade from his Father-in-Law, David Janke. Wenzel’s Lock and Key was then established in 2005 and continued until the time of his diagnosis.

Steven loved to hunt, fish, and spend time with family.  He also enjoyed tinkering in the garage and working on his  ’71 Mustang.

He was preceded in death by his parents, and Mother-in Law Laverne Janke.

A private family serivce will be held at a later date.

To order memorial trees or send flowers to the family in memory of Steven Wenzel, please visit our flower store.