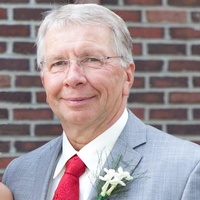 Stanley Wayne Spitzer, 68, Streeter, ND died on August 20, 2018 at Sanford Hospital in Fargo, ND, surrounded by his family. He died as a result of injuries sustained in a motorcycle accident.

Stanley Spitzer was born on October 24, 1949 to Alvin and Olga (Schumaker) Spitzer of Streeter, ND. He attended country school before graduating from Streeter High School in 1967. He married Elizabeth Dusterhoft in 1969. He graduated from Valley City State University with a teaching degree in business and physical education. While in college, he owned and operated a gas station in Valley City, ND. He taught in Veblen, SD, and Balta, ND before returning to Streeter in 1975 to teach and coach basketball and cross country at Streeter Public School. His son, Chad and daughter, Bridgette were born in 1970 and 1974. He married Joyce Larson in 1980. His twin daughters, Brittany and Brooke, were born in 1985. He taught in Streeter until 1991 before finishing his teaching career in Lehr in 1992. He was the Medina Post Office rural mail carrier from 1992 until his retirement in 2016. Stan ranched with his father until 1994, and continued to ranch on his own, after his father's death. He was still ranching at the time of the accident.

Stan was a member of the United Church of Christ in Streeter, ND. In his younger years he enjoyed running road races and completed 6 marathons along with a half marathon in 2010 with his family. He also enjoyed playing basketball and softball. Over the last 5 years, he had started ranching side by side with Rob and Katy Ruff, of Gackle, ND, which brought a renewed source of enjoyment to ranching. In his later years, he also developed a love for riding his Harley-Davidson motorcycles.