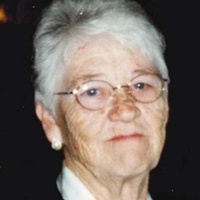 Sally was born July 19, 1932 in the log house on the family homestead near Nibbe, MT, the daughter of Hebert and Pearl Mae (Warren) Grice. Her oldest sibling by 22 years, being the attendant at her birth, was the youngest of 7 children. She attended school at Pompys Pillar, MT, later at San Diego, CA. She returned to Montana and in 1947 moved to North Dakota.

She and John C. VanEaton were married February 25, 1948 at Lovell, WY. They made their home on a farm near Medina where they raised their 5 children. Following the death of her husband December 2, 1972 she continued to live in the Medina area.

She and Paul Guthmiller were married December 20, 1974 and lived in Medina. Following Paul’s death November 17, 2007 she continued to live in Medina until 2012 when she entered Eventide at Hi-Acres.

Sally was a member of the English Lutheran Church in Medina.

She was preceded in death by her parents, both husbands, 1 step son, Marlyn Guthmiller, 1 grandson, Jesse, 1 step grandson, Kevin Buskness, 3 brothers and 2 sisters.