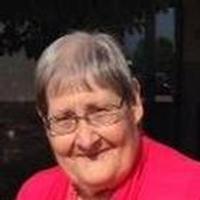 Ruth Lee was born February 8, 1944 at Yankton, SD, the daughter of Alvin and Myrtle (Knudson) Lee. She attended and graduated from Augustana Academy in Canton, SD. She also attended Bethany College at Mankato, MN.

She and Joe Magnuson were married and made their home in Minnesota.

She and Darold Farthing were married in Minneapolis were she was a housewife. They moved to Phoenix, AZ and later moved to Jamestown, ND where she worked at Arnie's Truck Stop, until going to work at Big Jims Restaurant until retiring. In 1991 she moved to Montpelier where she did home daycare. In 2007 she entered Eventide at Hi-Acres in Jamestown.

She was a member of the Montpelier Lutheran Church, and also volunteered and helped at the Eventide with activities.

She was preceded in death by her parents, 1 daughter, Judith Farthing, 2 brothers and 1 sister.

To order memorial trees or send flowers to the family in memory of Ruth Farthing, please visit our flower store.
Send a Sympathy Card