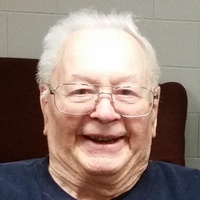 Robert was born May 9, 1931 at Cooperstown, ND, the son of Rasmus and Ethel (Hewitt) Thu. He attended school at Sutton and graduated from Sutton High School.

He entered the US Army November 26, 1951. He served in Germany until his discharge November 6, 1953 at Fort Sheridan, IL with the rank of PFC.

He and Hazel Swanson were married March 16, 1954 at Moorhead, MN. They made their home at various places while he worked construction in the ND/SD/MN/ and MT areas. In 1963 they moved to Jamestown where he worked at Boyd’s Standard, later Tom’s Standard later A&B Standard. He retired in 1992 and continued to live in Jamestown.

He was a member of the VFW.

He was preceded in death by his parents and 1 sister.