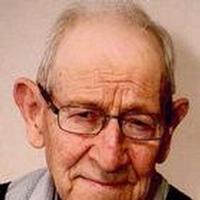 Bob Nagel was born June 11, 1925 at Bismarck, ND the son of Charles Nagel and Meta Lena (Redmann) Nagel. He received his elementary education in the Frazier School in Burnt Creek Township north of Bismarck, ND. He graduated from the Bismarck High School in 1942.

He and Myra Adeline Bjork were married December 24, 1946 at Jamestown, ND. They made their home on her parent's farm from 1946-1953. In 1953 they moved to their own farm east of Montpelier, ND where they have resided until they moved into the Heritage Center at Jamestown.

He was preceded in death by his parents. He was the last of his family being also preceded by his sisters, Frances Smith and Edna Bjork, brothers, Kenneth and Richard, sisters-in-law, Jeanette Bogue and Lyla Swanson, brothers-in-law, Alton, Clarence and Maynard Bjork.

Funeral Service - 11:00 AM Monday May 16, 2016 in the Montpelier Lutheran Church in Montpelier with Rev. Terry Anderson, pastor officiating

Interment - at a later date in the Montpelier Lutheran Cemetery

To order memorial trees or send flowers to the family in memory of Robert L Nagel, please visit our flower store.
Send a Sympathy Card