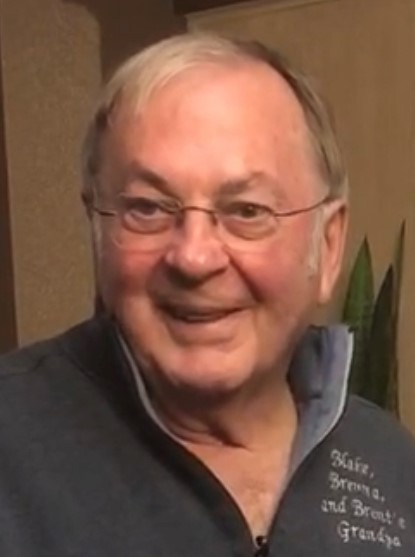 Bob Krause was born May 26, 1945 at Jamestown, ND the son of Jacob Krause and Irene (Lang) Krause.   He attended a local rural school 3 miles from home, according to Bobby it was fortunate he lived in ND, so it wasn’t uphill either way. He also attended Alfred Elementary school and graduated from Gackle High School in 1963.  He then attended Wahpeton State School of Science for 1 year.  In 1965 he entered the United States Marine Corp.  He was one of the 1st Marines to land in Vietnam.   He was honorably discharged in 1967.

He and Sandra Rychlik were married in Jamestown, ND.  They made their home in Jamestown where he began his career with Burlington Northern Railway.  He was manager of B & B (Bridges and Buildings).   He and Karen Schlenker were married in Gackle on September 27, 1980.  He and Karen built 2 beautiful homes, which clearly displayed their artistic talents in beautiful wood work and landscaping.  In 2001 they retired and moved to Bismarck, after 31 years being with Burlington Northern.  In his retirement he enjoyed his walks and coffee with his buddies. Following the death of his wife June 18, 2014 he has continued to reside in Bismarck.  In the last years of his life he was blessed to have Jan Kville as a special friend and companion.
He was a member of the First United Church of Christ in Gackle, ND, American Legion and the Fraternal Order of Eagles where he enjoyed playing bingo.  Bob thoroughly enjoyed his grandchildren and was very proud of all their accomplishments.

He is survived by his daughter, Shanny (Greg) Richard, one son Randy Krause; 3 grandchildren, Blake, Brenna and Brent; one sister Karen Krause and one brother Rodney (Gwen) Krause, one brother-in-law, Dean Remboldt and nieces and nephews.

He was preceded in death by his parents, wives and sister Terry.

Visitation – 1-5 Friday at the Funeral Home in Jamestown

Funeral Service will be at 10:30 AM Saturday May 30, 2020 in the Temple Baptist Church in Jamestown, ND with Pastor Steve Davenport, officiating.

Interment will be made in the Gackle City Cemetery, Gackle, ND.

To order memorial trees or send flowers to the family in memory of Robert D Krause, please visit our flower store.
Send a Sympathy Card