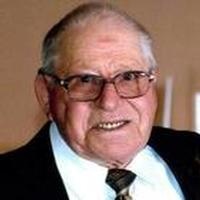 Reuben was born September 28, 1920 on the family farm near Alfred, ND the son of Edward Klundt and Barbara (Moos) Klundt. He attended local country school thru 8th grade and then started working on the family farm. At age 18 he left home to serve in the Civilian Conservation Corps, Company 764 at Remer, MN.

He and Leona Miller were married October 23, 1949. They farmed near Alfred and then moved to Jamestown where Reuben helped build the Jamestown Dam. After the dam was completed, they returned to farming south of Gackle. In 1961 they moved into Gackle where Reuben worked at the Gackle Packing Company for several years. Reuben later went to work for Mertz Construction laying cement blocks for house basements. Although lying blocks was hard physical work, it was his favorite job. He later worked at the Coop Elevator until his retirement in 1985. Reuben enjoyed building things in his garage, took immaculate care of his yard and raised many kinds of vegetables in his garden... for everyone but him to eat. He also enjoyed nap time with his 2 cats, Blackie and Whitie.

Reuben was a life-long member of the United Church of Christ in Gackle, ND and served as the church custodian for many years.

He was preceded in death by his parents, 1 sister in infancy, 1 sister Lillian Lehr, brothers, John, Emil, Edwin and Harold and 1 grandson, Jason Dale Klundt.

Funeral Service will be at 10:30 AM Saturday May 28, 2016 in the Emmanuel Lutheran Church in Gackle, ND with Rev. Rick Steele, pastor officiating.

Interment will be made in the Gackle City Cemetery, Gackle, ND

Prayer Service: 7:00 PM Friday evening at the Church in Gackle.