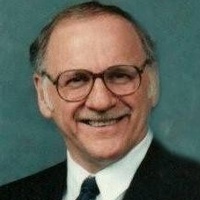 Raymond Rueb, 87, of Phoenix passed away on August 3, 2017. He was born on July 2, 1930 to Heinrich Rüb and Phillipina (Bauer) Rüb in Eureka, SD. He grew up on the family farm in Wishek, ND where he attended public school and began high school. In 1947, the family moved to a farm 12 miles southwest of Streeter ND. He graduated from Streeter High School in 1949 and pursued voice lessons at Jamestown College, Jamestown, ND.

On September 6, 1949, Raymond married the love of his life, LaVerne Buck in Streeter, ND. Raymond taught public school in rural Streeter area during the first years of their marriage and ministry while he took Bible courses by correspondence. He also began pastoring several churches while simultaneously farming near Medina, ND to provide for his family.

In 1969, he accepted the position as Senior Pastor of First Assembly in Benton Harbor, MI and was subsequently elected Superintendent of the German District of the Assemblies of God. Raymond traveled extensively throughout the world in evangelistic ministry and in 1988 accepted the position as Senior Pastor at Southside Pentecostal Assembly in Edmonton, Alberta, Canada. Once he retired, he was still more than willing and honored to serve as interim pastor in both Grand Forks and Medina, ND before relocating to Phoenix in 2005.

In 2006, he partnered with his brother, Oscar, to raise funds for Bibles for China. His focus never wavered and he was determined to raise $1 million. Raymond's passion was in prayer and he remained active in the retired minister's fellowship and the Maranatha class at Dream City Church (formerly Phoenix First Assembly of God). Even in the last weeks of his life, he made dozens of phone calls to friends and family, praying for and encouraging each of them.

Funeral service will be at 10:00 AM Saturday August 19, 2017 in the Ebenezer United Methodist Church in Streeter, ND.

Interment will be made in the Streeter City Cemetery, Streeter, and ND.

Streeter, ND 58483
To order memorial trees or send flowers to the family in memory of Raymond Rueb of Phoenix, Arizona, please visit our flower store.