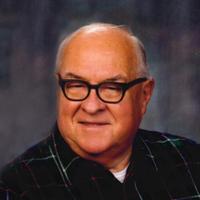 Quentin Zimmerman was born November 8, 1936 at Gackle, ND the son of Jacob (J.A.) Zimmerman and Mollie (Borth) Zimmerman. He graduated from the Gackle High School in 1954. He entered the United States Army during the Korean War serving in Germany and was discharged two years later. He attended University of ND before going to Illinois College of Optometry.

He and Elsa Gay Kirker were married December 2, 1961 at Chicago, IL. Following his graduation from Optometry College he practiced in Gackle for a short time before moving to Jamestown where he continued his optometry business. In 1987 he retired and has continued to reside in Jamestown.

He was a member of St. Paul’s United Methodist Church in Jamestown, ND. He was a life member of the Eagles Aerie 2337 and Elks Lodge. He also was a member of the V.F.W. and American Legion. Quentin enjoyed the outdoors, pheasant hunting and traveling with his motorhome. He loved his hunting dogs, eating German/Russian food and going to coffee at 10 and 3 every day.

He was preceded in death by his parents, 2 children, James and Monica, 1 sister Delphine, 1 brother Wallace and his best friend, his little poodle, Gizmo.

In lieu of flowers to please make donations to The James River Humane Society.