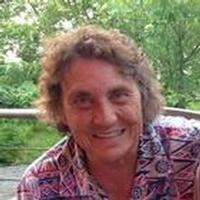 Norma Haussler was born September 29, 1934 at Monango, ND, the daughter of Herman and Alma (Herrmann) Haussler. She attended the Monango School and graduated from Monango High School in 1952. She worked at Memorial Hospital in Ellendale as a nurse's aid and later moved to Fargo where she worked at Newbury's Department Store.

She and Duane Wagner were married in 1955 at Monango, ND. They made their home in Monango where she was a homemaker, until moving to Washington in 1968. In 1970 they moved back to Jamestown where she worked at the Tempo Mall.

She and Glen Hinger were married in 1984 at Billings, MT and made their home in Jamestown where she worked at Ray's Printing until her retirement. Following the death of her husband, 2013, she continued to reside in Jamestown.

She was a member of Concordia Lutheran Church. She enjoyed being outdoors and her passion for flowers. She loved spending time with her grandchildren and will be known for her infectious laugh.

To order memorial trees or send flowers to the family in memory of Norma J. Hinger, please visit our flower store.