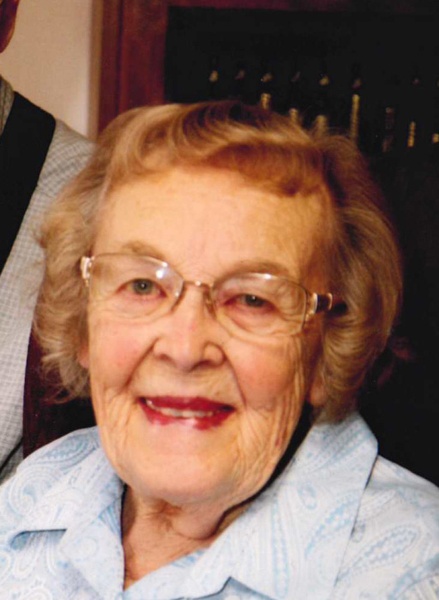 Myra Adeline Bjork was born into the Norwegian family of Albert and Minda (Halvorson) Bjork on September 29, 1923, at Marion, ND. She was baptized and confirmed at the Marion Lutheran Church. She was raised by her older sister, Jeanette, after their mother died in 1933. As a youth she was active in the Manns Township 4-H Club. She attended Manns township country schools and Greenland Township consolidated school where she was a member of the girls’ basketball teams that participated in the state Class C basketball tournaments back in the day, and there graduated from high school. She attended college at Moorhead State College and Valley City State College and began teaching at schools in Manns Township and Rosebud Township west of Litchville. She was especially close to her sisters, Jeanette and Lyla.

Myra married Robert Nagel on December 24, 1946. They lived first on the Bjork farm, rural Marion, and then moved to the Nagel farm, rural Montpelier, ND, where they raised their four children. She taught her children the value of work and a strong moral upbringing. She was very active in the church life at the Lutheran churches in Marion and Montpelier, teaching Sunday school and participating in the women’s activities. She was also active in the local Gideons women’s auxiliary.

Myra was a letter writer, sending letters almost weekly to her brothers during the WWII era and her sons during the Vietnam era while they served in the military, as well as other family members. She was proud of her Norwegian heritage, while being married to a German. She taught her daughters to make many of the Scandinavian foods and other family favorites that are still enjoyed by the family. Myra and Robert were fortunate to be able to visit the Bjork home farmstead and relatives in Norway. She saw to it that a beautiful birch tree was planted on the front lawn when she and Robert built a new farmhouse because in the Norwegian language Bjork means birch.

She is survived by her four children, Glen (Julianne) Jamestown, Kent (Marsha) Carmel, CA, Ann (Gary) Olson, Fargo, and Jane (Rusty) Kluting, Montpelier, four grandsons, Boyce, Louis (Jenna) and Orrin Kluting and John Nagel, and many nieces, nephews and cousins. We are thankful for her life and the lives she gave us.

The family wishes to thank her caregivers at Eventide Nursing Facility, the doctors and nurses who cared for her in the final days of her life. Any memorials may be sent to the Montpelier Lutheran Church women or a charity of your choice.

A private family memorial service will be held at a later date.

To order memorial trees or send flowers to the family in memory of Myra Nagel, please visit our flower store.