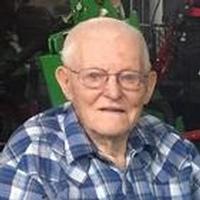 Morris Holman was born December 11, 1928 near Fredonia, ND, the son of Olaf Holman and Adeline (Grosz) Holman. He received his education at the Haag School District #2 in Logan County and graduated from Kulm High School in 1946. Growing up on the Holman Homestead farm, 1 ½ Miles east of Fredonia, he enjoyed hunting small game, pheasants and ducks.

He and Ethel Herren were married October 15, 1954 at Putnam, TX. They made their home in Fredonia after his retirement from the Navy. In 1968 he went to work for the Fredonia Co-op Oil Company and also farmed a bit. Ethel passed away February 11, 1993.

He and Dolores Bagan were married in 1998 in Jamestown, ND. Jim and Dolores continued to share their love for camping, spending time at their lake cabin on Lake Melissa, MN and square dancing. In 2013 they moved to Breckenridge, MN.

He was a member of the American Legion.

He was preceded in death by his parents, his wife, 1 brother, Gene, 1 granddaughter, LoRee and 1 grandson, Jesse.

Visitation - 1 hour before Service at the funeral home

To order memorial trees or send flowers to the family in memory of Morris "Jim" Holman, please visit our flower store.