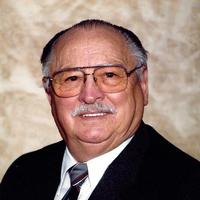 Meinhardt Veil was born March 28, 1929 in Streeter, ND the son of Fred Veil and Bertha (Kubler) Veil. He received his elementary education in the local school and grew to manhood in the vicinity, where he helped on the family farm.

He and Gertrude Reiser were married July 2, 1950 in Streeter, ND. They made their home on a farm east of Streeter where they resided. They moved into Jamestown in 1956 where he worked for the North Dakota State Hospital in the farming department and green house before being promoted to head of the painting department where he remained for 32 ½ years.

He and Juanita Hawkins were married September 3, 1982 in Jamestown, ND. They made their home in Jamestown and in 1987 he retired.

He was a member of St. John’s Lutheran Church, President of the AFL-CIO labor union for the State Hospital and President of the Eagles club from 2000-2002. While President of the Eagles club, Meinhardt received the Fraternal Order of Eagles First High Producer Award for adding the highest number of members of any Eagles organization in the country that year. Meinhardt enjoyed woodworking, painting pictures, making quilt tops, embroidering and was an avid wildlife enthusiast. He was very talented working with his hands and he especially took great pride in maintaining and caring for any property that he resided. He logged countless thousands of hours making his yard resemble the local golf course.

He was preceded in death by his parents and one sister Viola.

Memorial Service will be at 10:30 AM Tuesday November 15, 2016 at St. John’s Lutheran Church in Jamestown, ND with Pastor Erik Weber officiating.

Interment will be made in the Highland Home Cemetery in Jamestown, ND followed by lunch and a time of fellowship at the church.