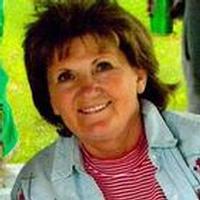 Mary Ringsaker was born December 1, 1949 at Sisseton, SD, the daughter of Lewis and Eloise (Kumm) Ringsaker. She attended school and graduated from Sisseton High School in 1968.

She and Randy Habeck were married August 31, 1968 at Sisseton, SD. They started their lives together in Claire City, SD. They moved to Barlow, ND in 1974 and in 1989 she worked as a secretary at the Barlow Grain Elevator. In 2003 they moved to Jamestown where she retired.

She was a member of the Trinity Lutheran Church in Carrington.

Mary was a beautiful, creative, independent, capable woman. Her legacy will be remembered through her paintings, pictures, and handiwork.

She was preceded in death by her father.

Following the Service there will be a gathering for family and friends at the cabin.

In lieu of flowers, please donate to the children of St. Jude's.

To order memorial trees or send flowers to the family in memory of Mary Lorena Habeck, please visit our flower store.
Send a Sympathy Card