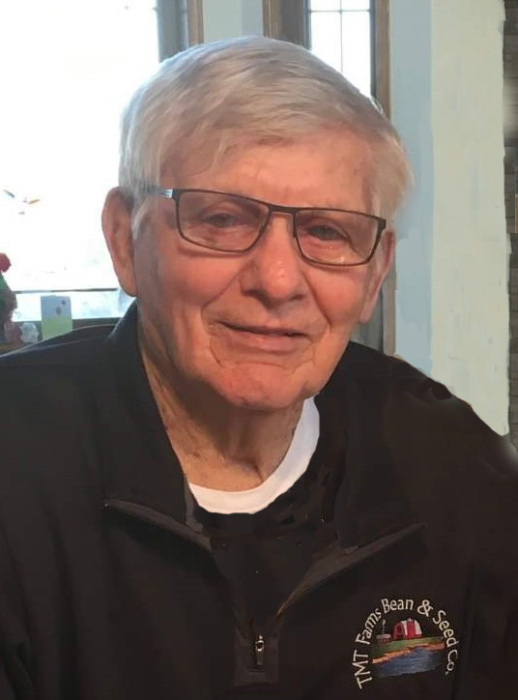 Marvin Wanzek, 87, Jamestown, ND, joined his Heavenly Father the evening of  October 24, 2020 at his home, surrounded by family. He was born April 4, 1933, the son of Vincent and Agnes (Kerber) Wanzek. He grew up on a farm with his parents and 9 siblings south of Windsor, ND.

Marvin attended St. John's Academy, graduating in 1951. He helped his father farm for a few years before entering the United States Army in 1955. He married Donna Baenen, on June 19, 1956, at Saint James Catholic Church. Together they resided in Fort Polk, La, until Marvin's honorable discharge in 1957. When they returned to ND, Marvin acquired his private pilot license through the GI Bill, and he started his dairy and farming career with his father and younger brother, Richard. Several years later this partnership dissolved and in 1988 TMT Farms was created; a partnership between Marvin and his sons, which he continued to be a part of until just a few years ago.

After having five children of their own, Marvin and Donna became involved in other child care situations. They participated in the Friendly Town Program, took in foster children, and had an exchange student, Clovis, from Brazil. In 1970 they agreed to long term foster care of a baby girl with special needs. Marvin became very involved in Gail's life, including chaperoning Special Olympic events.

Marvin was a member of Saint Mathias Catholic Church, Windsor ND, and a life time member of the Knights of Columbus. In addition, with great pride he carried on his dad's tradition of maintaining the Saint Pauline Cemetery, Windsor ND, often involving his children and grandchildren in the mowing and trimming.

Marvin enjoyed snowmobiling, pulling his children behind in a sleigh, and making winter trips to Yellowstone and Canada. For many summers, he was the water truck transporter for the Fort Seward Wagon Train, with participants and horses eagerly awaiting his arrival after a long day on the trail. He also had the unique experience of riding a horse in the Rose Bowl Parade, Pasadena, California, in 1989.

Marvin was a simple man who didn't ask for much, but did like a good bargain. He loved this Country and was content with spending quiet time in North Dakota. He loved a good football game; a dedicated Vikings fan, and a good ice cream treat; a dedicated Dairy Queen fan. He also enjoyed watching his grandchildren participate in all types of sports. Marvin's favorite place to be was on the farm, where he taught his family many life lessons.

Mass of Christian Burial will be at 10:00 AM Friday October 30, 2020 at the Basilica of St. James in Jamestown, ND.  Attendees should follow social distancing guideline. (A recording of the service will be available below Friday afternoon).

Visitation – Wednesday 1-5 and Thursday 9-5 at the Funeral Home.

Vigil Service will be at 7:00 PM Thursday at the Basilica of St. James.

Donations in Marvin's honor can be made to Saint John's Academy, and the Jamestown Regional Medical Center-Hospice (JRMC Hospice).  SEE Links Below

To order memorial trees or send flowers to the family in memory of Marvin Wanzek, please visit our flower store.
Send a Sympathy Card