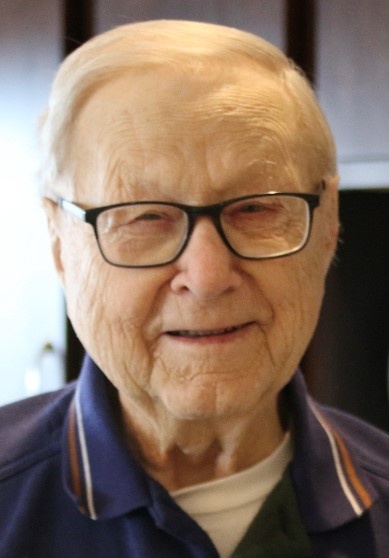 Marvin W. Hochhalter, age 85 of Jamestown ND, received his wings on February 19, 2020 at the Jamestown Regional Medical Center after a short illness.

Marvin was born on April 14, 1934 to Martha and Leopold Hochhalter of Wishek, ND. He attended rural school until 1944 and then he moved southeast of Lehr, ND. He graduated in 1952 from Lehr High School.

In the fall of 1952, he taught rural school five miles north of Lehr. Then, in the fall of 1953, he was inducted into the Armed Forces. He went to basic training in Fort Riley, Kansas. He was later transferred to Fort Knox, Kentucky for tank mechanic school.

In the spring of 1954, he was transferred to an area near Seoul Korea. This is where he served the remainder of his service. He returned to the United States in 1955.

He graduated from Valley City State College in 1959. While in college (1958), he married Irene Schmidt of Lehr, ND. After graduating, they moved to Jud, ND where he signed his first teaching contract. There he was the principal, taught five classes, and coached high school basketball and baseball.

In 1961 Marvin and Irene moved to Steele, ND where they raised their 5 children. Marvin taught school for the Steele-Dawson public school. He was also the head boys’ basketball coach for seven years and then was an assistant basketball coach for the boys and girls. He coached for a total of 26 years. Over this time, Marvin developed many great relationships with his students and athletes which he took great pride in. He loved visiting with former players and recalling memories that were still so fresh in his mind. He also loved giving his grandchildren advice as though he was still coaching. He would always be the first to fix an incorrect free throw shot. Free throws win games! Marvin retired from teaching in 1990 but continued to work for the school system as a bus driver for several years after.

Marvin had a love for horse racing, custom combining, farming, fishing, raising cattle, and going to auction sales. He had a passion for coaching, watching the Twins, the Timberwolves, and the Vikings, and coaching his own grandkids from the stands at their ballgames, and mostly spending time with his family. Marvin was a member of the First Presbyterian Church in Steele, ND.

Funeral service will be at 3:00 PM Sunday at the Kidder Co. School Gymnasium in Steele, ND.

Visitation 9-7 Saturday at the Haut Funeral Home and Celebration of Life Center in Jamestown, ND.

Prayer Service will be at 7:00 PM Saturday at the Funeral Home.

Arrangements are by the Haut Funeral Home & Celebration of Life Center, Jamestown, ND.

To order memorial trees or send flowers to the family in memory of Marvin W. Hochhalter, please visit our flower store.