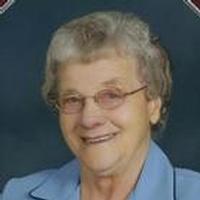 Lorraine Fiechtner was born Feb. 27, 1931, the oldest daughter of Jacob and Christina (Erbele) Fiechtner, in Guyson, ND. She grew up on a farm northwest of Lehr. After her eighth-grade graduation from a rural, one-room school, she worked for several families and relatives as a housemaid.

Lorraine and Fred were active members of Zion United Methodist Church, as well as the Fredonia Lions Club. They were married 35 years. After Fred's death in 1983 Lorraine remained on the farm for two years.

Lorraine married Albert Kirschenmann of Hosmer, SD, October 26, 1985. They moved to Eureka after their marriage. Lorraine and Albert enjoyed their work as staff and caretakers of the (now) Prairie Bible Camp. Lorraine was a dedicated supporter of the camp and enjoyed the fact that her maternal grandfather had helped build the octagon tabernacle building. Albert died Dec. 21, 2004.

Lorraine moved to Wishek in 2006. She moved into the Wishek Living Center Apartments in 2011, later residing in the skilled nursing care unit. She was preceded in death by her husbands, son Loren, son-in-law Don Heinle, stepdaughter Carol Kirschenmann Zundell, her parents and all six brothers (three in infancy).

Visitation will be from 3:00pm -7:00pm, followed by a Prayer Service on Wednesday, July 8th at Haut Funeral Home, Wishek, N.D.

The family will direct memorials, in lieu of flowers, to the Lehr United Methodist Church, Prairie Bible Camp (the former Lehr Tabernacle) and McCoy Ministries

To order memorial trees or send flowers to the family in memory of Lorraine Geiszler-Kirschenmann, please visit our flower store.
Send a Sympathy Card