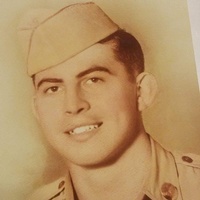 L.D. was the youngest of 6 children born during the great depression. In 1937, because of the drought, the family relocated to Jamestown, ND where Bill served as a rural mail carrier. L.D. often told the story and how ironic it was that Bill’s nephew Gale Steinmetz, helped them move during a heavy rainstorm where Gale’s truck became stuck as they left the family farm.

L.D. was raised into adulthood just north of Jamestown, near the “spot on the road”. L.D. graduated from Jamestown High School in 1948 and entered into the US Army during the Korean War. He served in the country of Panama where he fulfilled a childhood vision from that “spot on the road” where he would meet and marry his bride Lucia Polanco in 1953. To this union seven children were born.

L.D. had an unerring devotion to the truth and fellowship of God. L.D. cherished his children and family greatly. L.D. had many other interests. He was active on the Fort Seward wagon train in the early years, serving as a camp cook. This was an extension of his Army and National Guard service. He was a charter member of the Jamestown FFA and his special interest was horses, raising many since his first pony “Flossy”. L.D. enjoyed horses as a youth and continued that interest as an adult more because of his daughters’ interests. He loved to hunt because of his sons’ love for hunting and eagerly supported Lennie’s idea for the Grassy Butte cabin and was the cabin cook for the last 20 years during hunting or mountain biking expeditions.

L.D. was also a postal carrier, insurance salesman and owner of a landscaping company. He built several custom homes before discovering the scrap iron and tractor salvage business. This he did until his death, buying and selling his last tractor in the fall of 2018. (He recently had his eye on a tractor near Medina and his good friend Gordon was to accompany him, but L.D. didn’t feel well, so postponed the trip.)

L.D. lived in Carson, ND for nearly 20 years and many family and friends “camped” at his home there. He eagerly awaited the arrival of his children, friends, or the ministry and cooked many grand meals enjoyed by all. While in Carson he enjoyed time well spent with his nephews and nieces and special friend Dorothy Hauge.

L.D. returned to Jamestown for health reasons in June 2017. Residing at the James House and continued his opportunity to be with family and friends; he lovingly prepared Tuesday morning breakfast for his sons and grandsons and any family who were in the area. All would squeeze around the little table up until this last Tuesday, January 8, 2019.

ND Veteran's Cemetery
To order memorial trees or send flowers to the family in memory of Leonard Steinmetz, please visit our flower store.