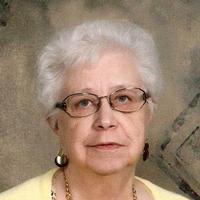 Lavonne Audrey Julson was born October 23, 1933 in Robinhood, Sask. Canada the daughter of Aubrey Julson and Leona (Jorgenson) Julson. In 1936 she moved with her parents to Plaza, ND where she attended the local school graduating in 1951. She attended Interstate Business College until 1952. She worked for the Minot Daily News in the Circulation Dept. In 1953 she moved to Denver, CO and worked for AT&T Telephone Company until 1959.

She and Robert L. Hodgson were married March 29, 1959 in Denver, CO. They made their home in Longmont where he worked for the railroad; later moving to Plaza, ND in 1969. She worked at the Plaza Public School as Secretary and Business manager for 19 years. She also was the Plaza City Auditor for 10 years. Following their retirement in 1999 they moved to Jamestown to be closer to their children. Following the death of her husband in 2009 she has continued to reside in Jamestown.

She was preceded in death by her parents, husband, 1 grandson, Ty Miller, and 2 brothers Keith and Curtis.