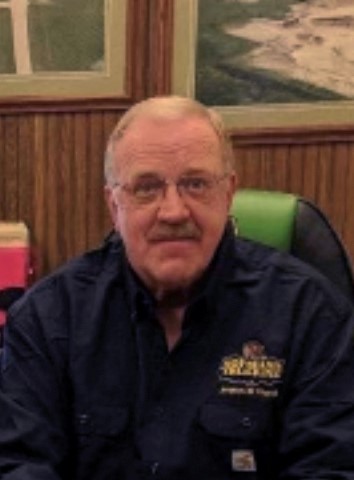 Larry grew up on the family farm and went to school in Medina, graduating from Medina High School in 1970. He then attended Interstate Business College in Fargo, ND, graduating in 1972 with an Associates Degree in Accounting. He joined the National Guard in 1973 and was honorably discharged in 1977. He was employed as Office Manager at Country Boy Dairy and as Office Manager and in Sales at Coca-Cola Bottling Co. and Westward Products, all in Jamestown. He also worked several years for Charles T. Davis Trucking, both as a driver and doing general truck and diesel engine repair. He started Hofmann Trucking, LLC, along with Curt Waldie on July 1, 1999. They have expanded the company to now include two locations in North Dakota and one in Douglas, Wyoming.

He enjoyed all types of sports, both as a spectator and as a participant. He played on the Men’s Slowpitch Softball Team and belonged to Basketball, Volleyball and Bowling Leagues in his younger years. He was a collector of many types of memorabilia, most notably anything with a John Deere logo. Recently he became interested in woodworking. Though he left the farm after high school, he kept the ethic of hard work throughout his life. He didn’t wait for things to happen – he made them happen. He didn’t want himself or those around him to fall in a “comfort zone”. He was always striving to move forward in whatever endeavor he attempted.

Larry is survived by his wife, Vel; brothers, Reinie and Gordon (Kathy) of Minnesota; sister, Shirley Dahl of Connecticut; uncle, Harry Ruff of Streeter, along with many cousins, two nieces and three nephews. He was preceded in death by his parents, maternal and paternal grandparents and many aunts and uncles.

Memorial Service- 11:00 AM Tuesday, August 3, 2021 at the Haut Funeral Chapel in Jamestown, ND. (The recording of the service will be available belowTuesday afternoon).

Your browser does not support this video format. You should be able to view it in Chrome, Safari or Internet Explorer.

Your browser does not support this video format. You should be able to view it in Chrome, Safari or Internet Explorer.
To order memorial trees or send flowers to the family in memory of Larry Hofmann, please visit our flower store.
Send a Sympathy Card