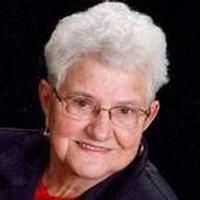 Judith (Reese) Williams, 84, died February 10, 2016 at Eventide in Jamestown. Judith was born in Graceton, MN on October 16, 1931. She was the second of seven children born to Allen and Leola (Rinaldi) Reese.

She received the first six years of her education in Minnesota. The family moved to Streeter where Judith continued her education graduating from Streeter High School in 1949. After graduation she attended Valley City State College on a scholarship training teacher for rural schools. She taught in Isco Township and graduated from VCSC in 1952 with a standard degree in education. She taught in Gackle for three years.

She and Boyd Williams were married on June 27, 1954. They farmed northwest of Streeter until 1983 when they built a home in Streeter. They were the parents of six children.
Judith resumed her teaching career in 1966, graduating from VSCS with a BS degree in 1977. She taught in Streeter and Medina retiring in 1992 after 31 years of service.

She was very active in the community and church. She held various PTA offices, was active in Band Mothers and Bobcat Boosters. She served as President, Secretary and Chaplain of the local American Legion Auxiliary. She held many chairmanships at local and Department levels. She was Department Chaplain of ALA for three years and served as a page at Department and National levels. She also served as District 4 President for ALA.
Judy was a member of St Luke Lutheran church in Streeter. She also held many offices in Women of the Evangelical Lutheran Church of America serving as President of St Luke Lutheran Women, Church treasurer and member of the Church council. She served on the Eastern North Dakota Synodical board for four years as the Jamestown Cluster representative. She also attended three church wide assemblies in Philadelphia, San Antonio and Spokane. Judy went on a border immersion trip to Texas and Mexico.

Judy enjoyed spending time with her family, visiting her siblings and Christmas (her favorite holiday). She enjoyed traveling with Boyd and after his passing she enjoyed going on trips with Shirley Sackmann and Judy Cunningham.

Judy was preceded in death by her husband, Boyd in 2009, her parents and two brothers, Donald and LeRoy.

Funeral Service will be at 10:30am Tuesday February 16, 2016 at St. Luke's Lutheran Church in Streeter, ND with Rev. Ryan J. Ferwerda officiating.

Interment will be made in Streeter City Cemetery, Streeter, ND in the spring.