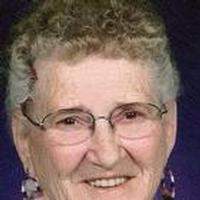 Joyce Ann Kinslow was born the eldest daughter of Clarence and Minnie (Ogren) Kinslow September 20, 1926 in Olmstead, IL. The family moved to ND in 1934 and to the Jud area in March of 1940. She attended the local school until 1944 when her parents moved to Swede Township. She attended Kulm High School her senior year, graduating in 1945.

Joyce married Otto Gahner of Jud, July 15, 1945. They began their farming career on the Fred and Karolina Gahner homestead. In 1946 they purchased the Gahner homestead and continued to raise polled Hereford cattle and grain farm until Otto's death in 1982. Joyce remained on the farm for a short time until moving into Jud her memory began to fail, she spent some time living with her sons, Scott and Tracy, before moving to assisted living in Gackle and then Edgeley. She settled in at Rosedele assisted living Center of Jamestown. She moved to Ave Maria Village in Jamestown in 2013, and lived there until her death.

She was preceded in death by her parents, her husband, and 2 brothers-in-law.

Jud, North Dakota 58401
To order memorial trees or send flowers to the family in memory of Joyce Gahner, please visit our flower store.