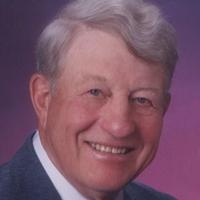 Jim was born August 7, 1927 on the family farm near Regent, ND, the son of Frank Gion and Marian J. (Kilzer) Gion. He received his elementary education in the Cherry Butte School and later attended high school at the Assumption Abbey in Richardton where he graduated in 1945. He entered the United States Army March 26, 1946 at Fort Snelling, MN. He served in the Asiatic-Pacific Theater and was discharged September 3, 1947 at Ft. Lawton, WA with the rank of T-5.

He and Marie Lefor were married January 14, 1950 at Benton Harbor, MI. They made their home on the family farmstead where they raised their family and farmed. They retired in 1997 and moved into Regent.

He was preceded in death by his parents, 1 daughter, LaVerne in 1997; 2 brothers and 2 sisters, Herman, Francis, Mary and Delores, 4 grandchildren, and 3 great grandchildren

In Lieu of flowers family prefers memorial to a charity of your choice.