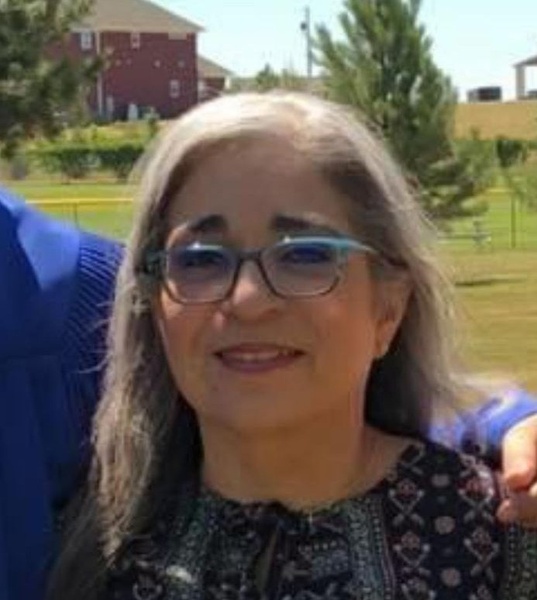 Irma was born January 23, 1974, the daughter of Jose Sr. and Irma (Ybarra) Hernandez in McAllen, Tx. Irma is the oldest three children. Throughout her young life, Irma and her family worked in South Texas and North Dakota. Irma loved to tell stories of her memories working in the Sugar beet fields and beekeeping with her brother and sister, Jose and Maria. One of Irma’s most recent adventures with her siblings was visiting her hometown, Mission, TX, in March of 2018.

Some of Irma’s favorite things were, Dallas Cowboy’s Football team, reading Stephen King books, Sci-fi/Natural Disaster movies, her favorite being Twister. She was also an active member of St. Patrick Catholic Church and had also been a Faith Formation Teacher for many years. Along with these activities, Irma also loved mowing her yard, she would say she got that from her father, Jose Hernandez.
On December 17, 1993, Irma married her soulmate, Delbert Diegel, and they welcomed four children Elizabeth, Olivia, David, and Dahlia. Irma became a grandma in 2012, and has loved every minute and moment since. Irma’s final wish and goal was to meet the seventh grandchild, Grace, and that goal was met December 18, 2021. She enjoyed cheering on her kids and grandkids during sporting events, she loved sitting at home taking naps with her cat’s, Coco and Junior, along with her dog Romeo. Her favorite thing to do was help her oldest grandson Gabriel with his homework and bringing her grandchildren in Bismarck donuts and chocolate coins.

Irma has worked at the South Central Health Hospital and Clinics since July 15, 1995 in the business office department as an insurance clerk. If you had any questions about insurance, she was the lady to go to. She also worked a few part-time jobs in her years as well, those being the Wishek Inn, Curt’s Service and recently Town and Country Bottle Shop. Irma also, throughout the years, helped translate for the Hispanic community in Wishek. Irma has touched many lives and will be deeply missed by many.

Irma is preceded in death by father Jose Hernandez Sr. And her soulmate, Delbert Diegel.

The recording of the funeral service will be available Friday evening.

To order memorial trees or send flowers to the family in memory of Irma Diegel, please visit our flower store.