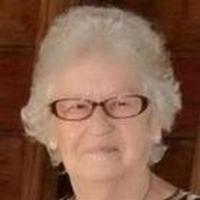 She and William (Bill) Blahna were married on January 11, 1949 at Moorhead, MN. They spent their entire live on the family farm near Kensal, ND. In the early years they enjoyed roller skate dancing at Red Willow and fishing. In later years Irene became an avid walker.
Irene worked hard on the farm. The first year she farmed with her son Jim she went round for round with him pulling a five bottom plow.

She loved the land. Irene enjoyed spending time with her family and the grandchildren; most recently "fishing" with her great granddaughter Alivia.

She was preceded in death by her husband William (Bill) Blahna; 3 sons, William (Bill), Kenneth and Michael; 1 grandson, Joshua; 1 brother, Gilbert; 1 sister, Rufina; and her parents.

To order memorial trees or send flowers to the family in memory of Irene C. Blahna, please visit our flower store.
Send a Sympathy Card